…but we sure do have a lot of fun writing them and singing them (sometimes into the toothbrushes from the dentist). thanks for being a part of our lives this week and happy sunday to you all!

We’ve started a new tradition over the past 6 months…. Like most families, we stay pretty busy during the week, so when a free Saturday rolls around we like to have a leisurely start to the day. We all gather in the kitchen about 10 am to hang out, cook, laugh, and enjoy each other. Sometimes while we eat we play hi-low (describing the best parts of our day/week and the worst parts of your day/week) and other times we just entertain each other with stories while eating delicious food.

This week’s menu is cinnamon raisin french toast, bacon, and fresh strawberries. We’re also being joined by our house guests – Grandma Re and Aunt Sissy – for the festivities. So, before this starts sounding too much more like a talk show (with musical guests, The Oneders!!) I thought I would ask – what weekend traditions, games or rituals does your family do? I’m genuinely interested so share your stories and have a great Saturday! I’m sure by now you’ve heard about the floods that took place in Australia in December of 2010 through January 2011?

Then you probably also know about the 6.3 earthquake that hit Christchurch, New Zealand in February and which (so far) has caused 182 deaths?

Just a week ago today, on March 11th, 2011, Japan was slammed by an 8.9 magnitude earthquake that caused a devastating tsunami which also took many lives and damaged many cities and towns.

I realize this doesn’t seem like the most “positive” way to start a blog post (by regurgitating natural disaster & loss of life statistics) but something has been bugging me lately. Last week during our Missions Conference I began realizing what it was….

It was most noticeable to me when a friend, Marcondes, from Brazil, got up and spoke to our local church. He showed a simple video slideshow of the dilemmas, triumphs, and life that he sees daily in Brazil. As he finished speaking it happened. We began singing a song that our church has been loving lately. But suddenly, the song lost all of it’s flavor and I wanted to leave the stage. Quit singing. Stop playing. Do more than just sing a song. I felt uncomfortable.

It’s not that singing wasn’t fine….the lyrics and melody of the song sounded nice together….people were enjoying it….but I felt completely disconnected from the song I was supposed to be leading. In one simple talk I had been gently forced to see the amazing life I have, while also being confronted with the not-so-amazing-and-sometimes-wildly-unjust-and-cruel lives that a good portion of the world was waking up to in that same moment. It reminded me of all the times I had turned the channel away from commercials like this.  Or closed the browser on videos like this because I didn’t want to see what was really happening in the world.

On Monday I’ll post a few SIMPLE ways we can help these countries in need. But during this weekend, and this season of Lent, I thought it might be appropriate for us all to be gently forced into “seeing” what is happening in our world, to be thankful for the lives we have been given, and hopefully to want to take action.

These two videos are mostly for the grandparents (though you’re all welcome to check them out). This is from late last year when the girls had a dance recital at school. The first video is of Claire & Ada and the second is of Macy – enjoy!

Happy 7th Birthday Ada! When you were a baby we called you Ada “Bean” because you were just a roly-poly, little cutie. Now you have turned into such a beautiful young woman and an amazing sister! Your Mom and I will always think of you as the Bean, but you have truly become a Jewel in our crowns. I love you!

END_OF_DOCUMENT_TOKEN_TO_BE_REPLACED 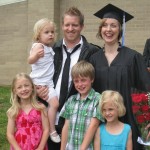 A momentous day for our family – we had the honor of watching my beautiful wife, Felicity J. White, graduate from the University of Illinois at Springfield (UIS) today with a Bachelor of Arts in English.

We started the day off with a late (if you ask the kids) brunch, headed to the commencement ceremonies, and then celebrated at the local Pizza Machine restaurant where they brought us a 40″ pizza via crane. Then before heading home we gave the graduate a surprise gift which you can watch happen at the bottom of this post. But first, here are a few pictures so you can see what our day looked like…

and last but not least…. here’s the video I promised you regarding the graduation gift we are giving to Felicity. To surprise her we had our kids walk in with “blank” papers. Then they flipped over the papers to reveal the gift – i P A D. We want to say a BIG THANK YOU to all our friends and family who donated money towards this gift!! You completely surprised her and thanks for joining in on the fun.

Finally – thanks to all of our family & friends who have celebrated this moment with us – we love you!